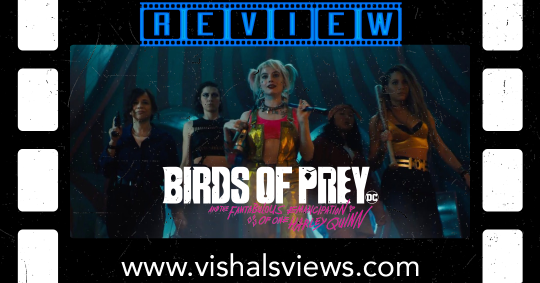 Apparently it’s getting a lot of bad reviews and I have no idea why?! So after so long we got a new DC movie, Shazam was a ton of fun so it was finally starting to feel DC was getting their shit together. This one really proved…they are! This was so unexpected of how good it was, it was consistently funny, it was consistently exciting and it made some really ballsey choices!

I actually did enjoy Suicide Squad, it wasn’t that great of a movie, but it was fun. But like everyone else, Harley Quinn was the star of that movie and we were all dying for her to come back, she’s back and better than ever! What was a cool take on this movie, they didn’t hide the fact that she’s not a good person, she is truly a villain and a psychopath through and through. Granted she has redeemable qualities, but she is deep down a bad person. The character was portrayed being dangerous as well as vulnerable, she realized she’s on her own now and she has a bunch of people trying to get revenge on her with what she did with Joker. The other characters were also for the most part great, especially Black Canary who kicked major ass and stole the show many times during the movie, Rene Montoya was probably the most sympathetic character in the movie seeing that she is truly trying to do the best she can, even resulting to questionable methods and associations, but somehow always getting screwed over in the end. The action scenes were so fun and ridiculous, but they were also brutal! Some of the most painful death scenes you’ll ever see in a DC movie!

While the other characters besides Harley Quinn were great for most part, many of the side characters were very much an afterthought, Huntress was pretty boring and didn’t have much personality or screen time, Victor Zsasz was pretty mundane and Cassandra was pretty unlikeable for most of the part. Black Mask was a pretty standard and forgettable villain with no real back story and explanation for who he is besides just greed. And to be honest, the story was kind of basic as well.

The movie was a complete thrill ride from beginning to end and kept you captivated and interested. We really need more movies like this in the DCEU that are just fun and exciting the whole time. More Harley Quinn please! I give this an 8/10

After a rough first night in #Ibiza I can now enjoy moments like this‼️. Always felt #Views like this were only available in #TombRaider or #Uncharted and I promise you pictures doesn't do justice!
When you've slept 5 hours in the last 36 and you have a 5 hour layover at #EDI some #Caffeine is needed🙃‼️
#Views from last night from #YYZ to #EDI on the way to #IBA ‼️✈✈✈