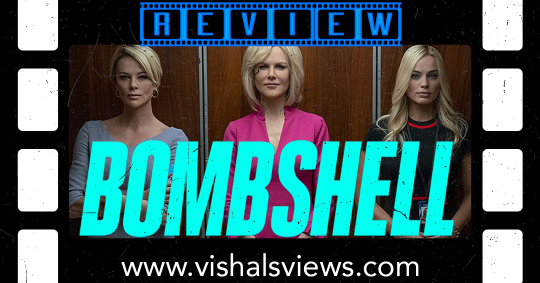 The #MeToo movement has really helped a lot of people and even saved some. It exposed many creeps for the monsters they really are, to the point you’re in disbelief that what happened, actually happened. That’s what I felt after watching Bombshell, it hard to believe that even people as powerful and popular as Megyn Kelly and Gretchen Carlson…but it did. And it leaves you with a sick feeling in your stomach.

Charleze is almost unrecognizable, you only see her as Megyn Kelly the whole movie. She was strong, brave and didn’t take shit from anyone, especially Trump! The way she portrayed Megyn Kelly made you admire her, made you want to follow her and stand with her. She became the ring leader in taking down one of the most powerful men in the industry when anyone else in her position would’ve turned a blind eye. Margot’s character made you feel a great deal of sympathy and gave you a painful truth bomb of what happens to someone when they’re in a situation like that. Also not sure how much of the film is accurate to the story, but the victim blaming and the defending of Roger Ailes makes you sick to your stomach…especially when he’s trying to justify what he did. You know you’re a piece of shit when Rupert Murdoch looks like a good guy!

While the story really revolved around Gretchen Carlson, she became a major afterthought most of the movie, it was as if she was an NPC in a game that appears sporadically, which is a shame since she was the centerpiece of this “Bombshell”.

The movie was ok but unpleasant to watch, which isn’t necessarily a bad thing considering the source material and most of the terrible shit happens off screen. However, this movie needs to be watched a lot more by larger audience so people can gain the courage to stand up against pieces of shit like Roger Ailes and make a difference. I give this a 7.5/10

#Humpday am I right?
Cheers go the Daikens or the Sweigers?
New hair, facial hair trimmed and it's Saturday!
This is literally one of the coolest things I've ever ever captured and I'm very fortunate!