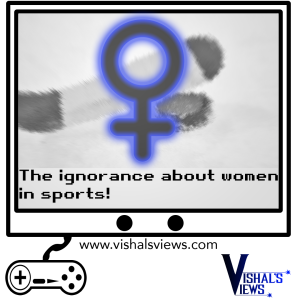 I consider myself a Male Feminist and take pride in it, as I have many amazing women in my life such as my Mom, Sister, Friends and my beautiful baby Niece. But the thing is I’ve gotten a lot flack for it, it doesn’t bother me because arguing with idiots only bring you down to their level. So this is something I’ve been noticing a lot lately, the ignorance of women in sports.

On a Blog TO post they announced that for the first time ever an all-female team will be broadcasting the NHL game between the Flames and the Golden Knights which is ground-breaking and amazing! But came a lot of ignorant people basically complaining about it…to the point it makes you cringe at their stupidity.

I saw comments about “How come they don’t have priests commentating on Easter” but that wasn’t the dumbest or most ignorant. There were many trying to predict what the commentary will be like with The tall handsome guy passes the black pucky thing to the guy who would look cuter if he shaved his beard…” (This is a direct quote by the way).

What’s the big deal?! These are Sports Analysists going it, they just happen to be women! One of them is Jennifer Botterill (Who I’ve actually had the pleasure of meeting) a 4 time Olympic Medalist with 3 Golds, I think she is way more qualified to broadcast this game than any insecure dumbass bitching about it! I’ve also heard people bitch about women going into the Hockey Hall of Fame, it’s the Hockey Hall of Fame not the Male Hockey Hall Of Fame!

This type of shit really irritates me, they are just as qualified to do this, they just happen to be women. I hope this trend continues, I hope it becomes the norm, because the world is changing, as Marvel says the future is female. These insecure dumbasses are looking at it as oppression and to the privileged, equality looks like oppression!

First #RollerBlade of 2022 and got caught in the storm...😅🌩🌪‼️
Here you go, something to help your #MondayBlues a before and after of #Bowser with another MARVELous cut from @marvelousmuttzgrooming 🐶‼️
Happy First Birthday my little princess, #LoveYou3000 love you and your big sister more than anything 💙
Absolutely delicious #Eclair from the @happychocco pop up at #SquareOne ‼️