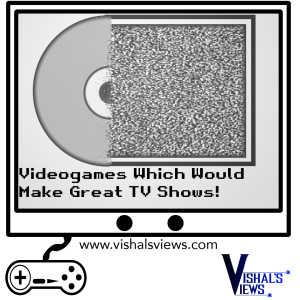 Despite multiple attempts video game movies have been mainly garbage besides Wreck It Ralph. But I feel that maybe there is just not enough time in a roughly 2 hour time frame to put it all together with the source material. So why not instead, expand the time frame, explore more of the source material and create something great. So here are some games that would benefit from being a tv series rather than a movie.

So he has been done on TV a few times with mixed results, but he was done as a cartoon. It would be an interesting concept to do this as a real life show where they show the creation and background of why and how he was created with Dr. Light and Dr Wily . And as seasons progress show him battling all the “Mans” and even introduce Protoman Roll and especially Rush! Creating an unorthodox family dynamic to it. And also base each season on one of the games.

Here is one that could also work well as a movie. But Metroid games are pretty long, it would cool to see the early days of Samus as she works her way up the ranks beginning in the Zero Suit. It would be a tense sci-fi horror show akin to the Aliens series. It could also explore the backstory of the Metroids, Mother Brain and Ridley. The only downfall I see is that the show would mainly be a singular performance as Samus is always on missions solo.

There are rumors that this is happening and please Make It So! While the movies are done, let’s be honest they’re just fun garbage. They added new characters who were never in the game and never really had any of the iconic villains or was true enough to the source material. Let’s change all that, have the actual characters in the game, show the multiple angles to the story each character sees and also, do 1 game per season. Show the destruction of the world gradually and have the characters interact with each other creating a great team dynamic.

This could be Fight Club the TV show or I could see this being an A-Team esque type of show where they are up against Bison and trying to team up to defeat him and reveal him to be a war criminal. Showing Blanka being experimented on, showing the back story/rivalry of Ken and Ryu, Guile being an arrogant douche to becoming a noble hero and Vega being a shady character with allegiance to anyone.

Another one which was attempted to be a show but failed miserably, but it was also a time where the technology was extremely limited and they weren’t able to make it grounded/believable. But also the dialogue in Mortal Kombat in general is a next level of cheesy. There was a YouTube series a while ago which gave us a grounded but awesome attempt to make it a good show. Doing it that way plus adding in the mystical elements of characters like Shang Tsung and Shao Kahn could make this fun to watch. But also, fix the dialogue!

Again tried with movies, but didn’t work out so well. So here is one that would be absolutely terrifying, it would be a really disturbing horror show. And it would be 1 game per season and would be mainly a singular character show with the random secondary character coming in. I am actually getting disturbed just thinking about it!

Going into battle flying on dragons, do I need to say more of how this would be really cool to watch?

While a Metal Gear movie is wanted by literally everyone, a show would actually be better. Metal Gear games are movies to begin with, with insanely long cut scenes to fit all that in into around 2-3 hours would feel painfully rushed. Having it as a show would let the story be told better, showcase key moments and do the character development properly. And this is another one where they do 1 game per season, or they could do the This Is Us model and do flashback episodes.