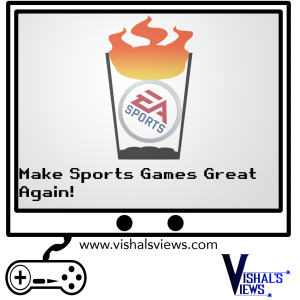 But sports games aren’t what they used to be, they’re the ultimate money gouging cash grab!  I miss the days when sports game were actually games, like NBA Jam, NFL Blitz and other similar arcade game types.

Now a days, you see sports games are simulators essentially.  The controls are overly complicated, the gameplay is too realistic and the biggest piss off in the world, almost nothing changes from year to year!

EA is arguably the most hated company in all of gaming and for good reason, they charge an arm and a leg every year for their games, whether it’s FIFA, NHL, Madden or NBA.  With minimum changes and upgrades besides updated rosters.

Why not just release the game every 3 years, update the rosters with DLC and then when a new title comes out, have all the minor upgrades that were being planned in the next 2-3 games all at once!  It’s a nice wish, but EA would never do that.  Sports games players don’t do themselves any favors, they buy them every year so EA knows they own the monopoly on the sports games and there’s nothing they can do about it!

They’ve gone to the point with sports games that you can’t really play them casually anymore, you either are the hammer or the nail.  There are some out now that you can play for fun like NBA Playgrounds and Super Mega Baseball, but we need more of those.  Someone needs to come out, give EA a run for their money so they can improve their product, because let’s face it, it’s shit and it’s not getting any better, it just keeps getting worse!

First #RollerBlade of 2022 and got caught in the storm...😅🌩🌪‼️
Here you go, something to help your #MondayBlues a before and after of #Bowser with another MARVELous cut from @marvelousmuttzgrooming 🐶‼️
Happy First Birthday my little princess, #LoveYou3000 love you and your big sister more than anything 💙
Absolutely delicious #Eclair from the @happychocco pop up at #SquareOne ‼️